Blog
Tone of voice, not groan of voice

“Please do not disturb”. How many ways are there to ask hotel staff to come back later? Countless, probably – but I don’t think “Get lost” should be one of them. Yet that’s exactly what I was obliged to hang on my door when staying in Lisbon recently.

In its desperation to be different, this establishment had clearly overstepped the mark. And succeeded only in making me groan. Being distinctive shouldn’t mean being silly. But if your efforts at verbal branding are so self-absorbed that you completely forget who you’re talking to, then apparently it does.

Examples in other sectors are depressingly common. Especially food and drink, where packaging that tries too hard to be amusing, cute or matey has become so widespread we’ve almost stopped noticing. Does anybody care (let alone smile) when Frijj milkshakes say, “Get in fella!” or when Tyrrells describe their crisps as “Perfect with a pork pie hat at a rakish angle”? Then, of course, there’s Virgin Trains. Coffee cups that say, “Hey there, hot stuff! Fancy a brew?” or toilet signs advising, “Be a hero! Don’t let the unflushables win”, look like the work of someone trying to draw attention to themselves rather than offer useful information.

Get over yourself. It’s just pizza, FFS! (I’ve withheld the brand’s name to protect the guilty.) 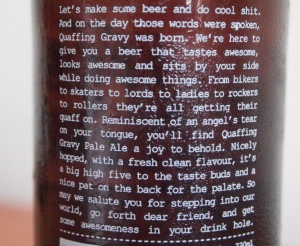 I suppose this was bound to happen. As more and more brands get over-excited about their tone of voice, it’s become extremely difficult to stand out from the Innocent-on-steroids crowd while remaining appropriate for your audience, and for your brand. If brand teams – both client and consultancy – could just take a step back, and think about what it’s really like to be exposed to the words they’re sticking on everything, the world might be an easier place to live.

But that sort of objectivity is probably too much to ask for. Unless, of course, they invite a writer to join the team. A writer with no baggage, who uses fresh eyes to see things from the audience’s point of view. And who’s seen, and worked with, enough brand voices to know the difference between being distinctive and being distinctly annoying.

With such a person’s input, you have a much better chance of getting noticed in the right way, for the right reasons. So who does it well? We think Puccino’s, a small chain of coffee shops, manages to blend humour and relevance to strike the perfect irreverent tone in a highly competitive market. 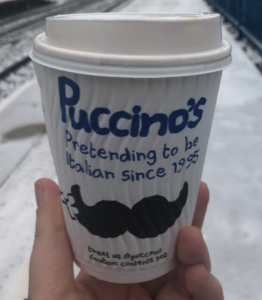 Unless more brands start including this kind of writer in their thinking – and using tone of voice sensibly and sensitively – the chippy, chirpy noise of over-written messages could soon be drowning out all attempts at intelligent, effective branding. It’s going to become increasingly difficult to be heard above the shouting.